The Phoenix-RTOS operating system starting from version 3 is based on microkernel architecture. It means that system consists of microkernel implementing basic primitives and set of servers based on these primitives and communicating over it. The main advantage of such architecture is high scalability. The disadvantage is performance degradation caused by message passing. Message passing demands in some cases memory copying and additional thread context switching.

The architecture is schematically presented on figure below. 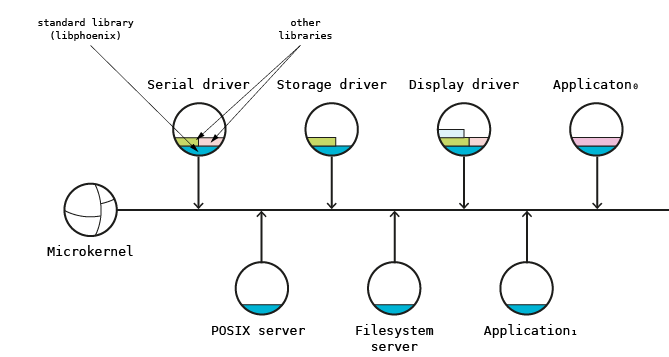 The main functionality provided by microkernel necessary to implement the operating system is the interprocess communication (IPC). In the figure above microkernel was shown as the bus between other system components and this is the main factor which differentiates the microkernel-based operating system from the traditional monolithic kernel based operating system. All system components interact with each other using message passing. For example file operations are performed by communicating with file servers. Such approach affects tremendously system scalability and modularity. The local communication based on shared memory can be easily extended to the remote communication using network. The modules (servers) implementing specific functionalities can be easily added and removed from the system due to message passing restricting interactions between them to a well-structured format. Servers partition the operating system functionality in the natural way. The message passing should be implemented in such a way that minimizes the communication overhead. Consequently it should be supported by some virtual memory mechanisms like physical memory sharing. In the further considerations it is assumed that messages are sent to the ports registered by servers. Ports together with identifiers of data structures operated by servers (e.g. files) identify operating system objects.

Interprocess communication has been described in Kernel - Processes and threads - Message passing chapter.

Standard library is the set of functions constituting the basic programming environment (providing the basic API) and based on the system calls. API could be compatible with popular programming standards (ANSI C, POSIX etc.) or could be specific for the operating system. Phoenix-RTOS 3 provides its own standard library (libphoenix) compatible with ANSI C89 and extended with some specific functions for memory mapping and process and thread management. The library can be extended (in cooperation with servers) with additional functions to provide the POSIX compliant environment. Such environment requires much more memory than basic ANSI C native interface but allows for execution of the popular open-source UN*X applications.

In the microkernel architecture servers plays very important role in the whole operating system. They provide functionalities removed from the traditional, monolithic kernel and moved to the user space. Good examples of such functionalities are file management or device management (device drivers). The main method for communicating with server is message passing. Each server allocates and registers set of ports used to receive messages from other system components. For example the file server registers new port in the filesystem space. Device driver registers new name in the /dev directory.

Server concept and server registering are described in Kernel - Processes and threads - Servers and namespace chapter.

Device drivers are specific servers responsible for controlling devices. They can implement protocol for I/O operations enabling to use them like files. Special mechanism is used to allow user level processes to communicate with the hardware. In architectures without I/O address space where device registers are accessible in the memory address space the special memory mapping is used. When device uses I/O space (e.g. ports on IA32) special processor flag is set permitting the unprivileged code to access the parts or whole I/O space. The flag is set during runtime using specific system call. Second important issue which should be discussed here is interrupt handling. When device drivers run on user-level, interrupts are redirected to the selected processes and interrupt handling routines are implemented as regular functions.

To understand the device drivers architecture and method of development of new drivers please refer to chapter Device drivers.