Memory objects were introduced to share the physical memory between processes allowing to identifying the sets of allocated memory pages or segments of physical memory on non-MMU architectures. When process maps object into its memory space kernel allocates physical memory for the objects data and copies it from the backing storage (e.g. filesystem). When other process maps the same object into its address space the most of already allocated memory for the object purposes can be shared. Only the memory for local in-process modifications should be allocated. The technique used for allocating the memory for the purposes of in-process object modifications when the write access is performed is known as copy-on-write. It is based on some features of MMU or segment management unit

Memory objects are used to optimize the memory usage. They are also used as the basis for shared libraries. The shared libraries are the libraries loaded during the process execution. They are loaded using object mapping technique, what result that only one library code instance exists in memory. Library data segments are allocated using copy-on-write technique. To use the shared library in the process context the dynamic linking should be performed.

Memory objects were introduced in Mach operating system. They were quickly derived from it and implemented in UN*X BSD and other operating systems. The Mach and BSD implementations were not optimal because of the way of implementation of copy-on-write strategy when processes are forked. This problem was solved by BSD UVM memory management subsystem by introducing the anonymous mapping abstraction.

Process’s address space is constituted by set of mapped objects. In traditional operating system memory objects correspond with files or devices (and are identified by vnode, inode etc.) or with anonymous objects representing the dynamically allocated physical memory. The are two strategies of retrieving object data into the process memory – immediate retrieval strategy when object is mapped (e.g. during process start) and lazy on-demand retrieval strategy when virtual page is first-time accessed during the runtime. 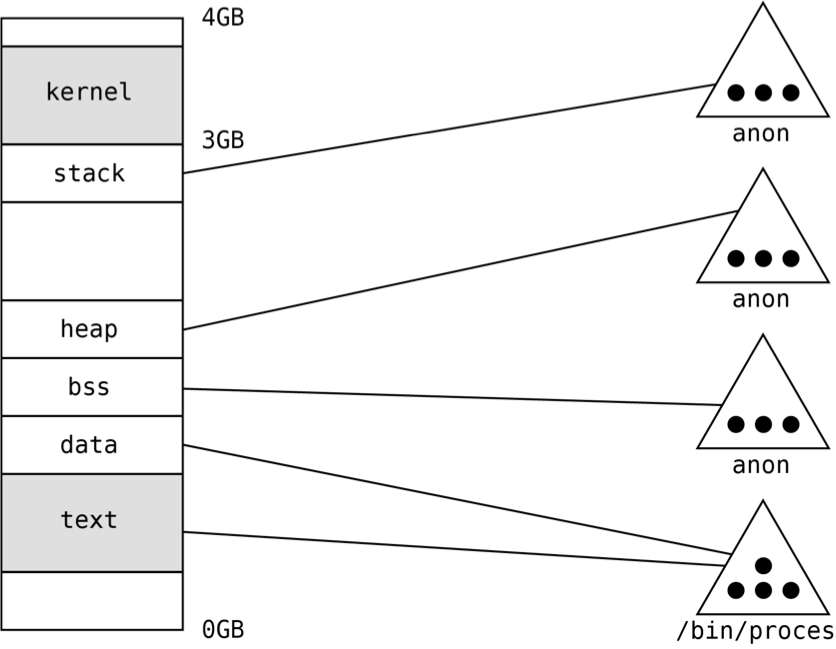 The first memory segment is constituted by the data from /bin/process file. It is mapped as the text, so it means that it is marked as readable and executable.

The segment located right after the text segment is linked with data from the same file, but it’s marked as data (readable and writable). The following segment is bss holding the uninitialized process data. This segment is associated with anonymous object. The anonymous object is the special object allocated by memory management subsystem for storing the process data created during the process load or the process execution. The bss segment is marked as readable and writable. At the end of user address space exist the last data segment named as stack. This is the process stack (stack used by the main thread). As well as bss and heap segments it is connected with anonymous object. After the stack kernel segments are mapped. These segments are inaccessible when the thread runs on the user-level. When control is transferred explicitly to the kernel via the system call or inexplicitly via interrupt, the executed program is able to access this memory. The described mechanism of separation of the kernel from user memory is the basic mechanism constituting the operating system security and reliability and preventing the interference between the operating system and processes.

The process address space in Phoenix-RTOS is presented on the following figure. 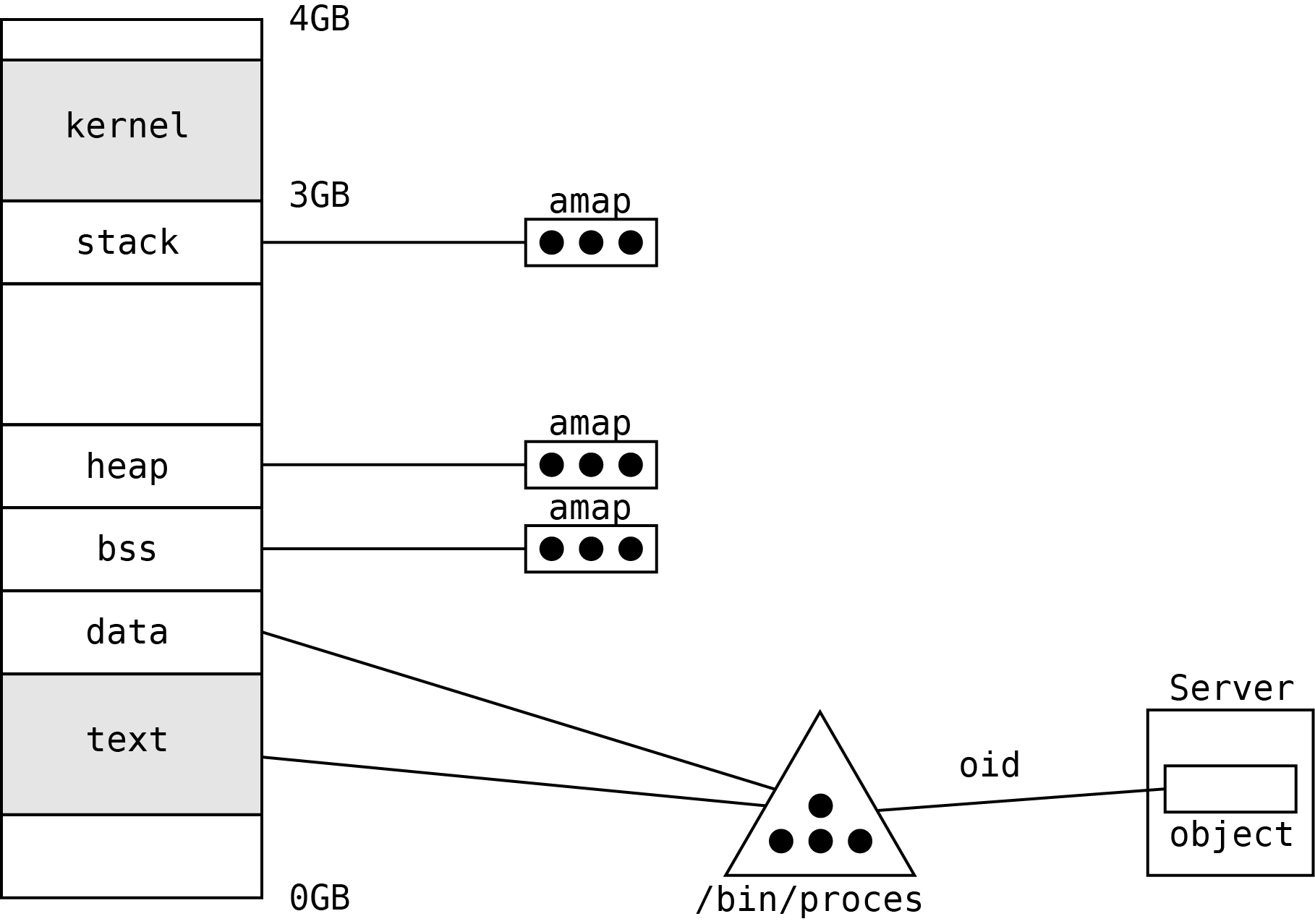 In Phoenix-RTOS objects are supported by operating system servers and are referenced by oid identifiers. Each oid consists of server communication port number and in-server object identifier. If object is accessed within the process the memory management subsystem allocates the new page and asks the server identified by oid for the data. The data are retrieved from server by sending the proper messages and are stored in the allocated page and mapped into the process at requested virtual address.

The main difference between the monolithic kernel approach and Phoenix-RTOS is that memory segments correspond to objects identified by oids (port and in-server id) handled by external servers, so operating system kernel is free of file abstraction. This allows to maintain the small size of kernel and emulate many file sharing and inheritance strategies on the user level (POSIX, Windows etc.) or event to create the final operating system lacked of filesystem abstraction.

To understand the memory objects idea let’s analyze the traditional approach implemented in Mach/BSD operating systems. The structure of Mach/BSD memory subsystem in the process context is presented on the following figure. 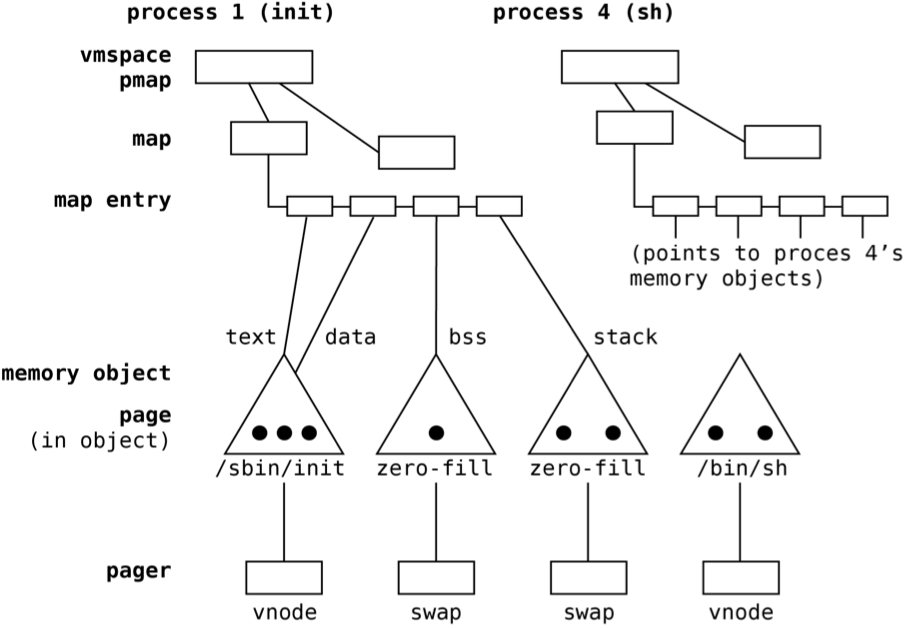 Each object stores physical pages allocated to preserve object data in physical memory (black circles). As it was mentioned before object are identified by vnodes (filesystem pointers) or can exist only in the memory management subsystem as anonymous objects.

Each memory object on the system has a pager that points to a list of functions used by the object to fetch and store pages between physical memory and backing store. Pages are read in from backing store when a process requires them (immediately or in case of page fault when lazy on-demand strategy is in use). Pages are written out to backing store at the request of a program (e.g., via the msync system call), when physical memory is scarce when process is swapped out , or when the object that owns the pages is freed.

The following figure shows how shadow object chains are formed in BSD VM. 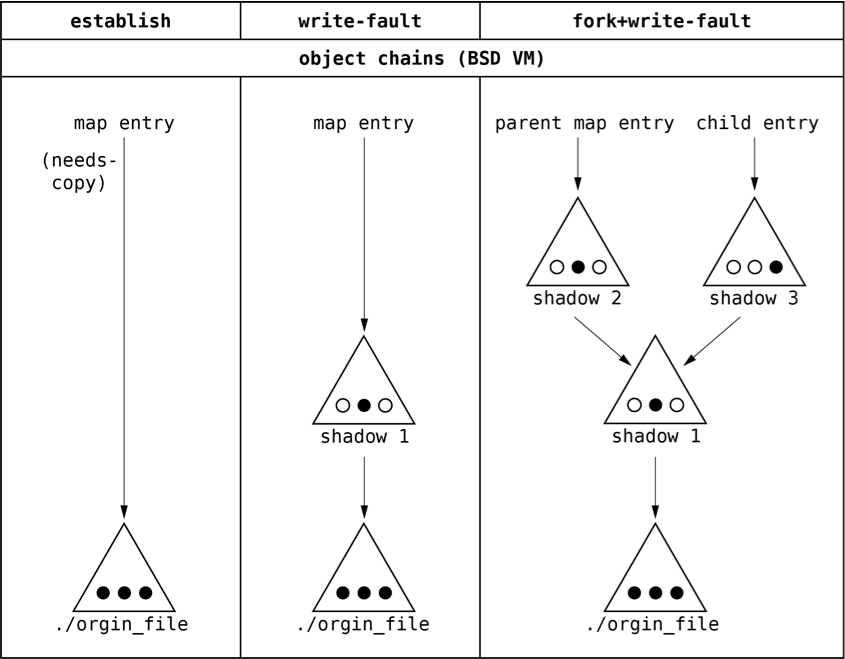 A three-page file object is copy-on-write memory mapped into a process’ address space. The first column shows the first step of memory mappings. The new entry with the needs-copy and copy-on-write flags is allocated. It points the underlying object. Once a write fault occurs, a new memory object is created and that object tracks all the pages that have been copied and modified.

The second column shows what happens when the process writes to the middle page of the object. Since the middle page is either unmapped or mapped read-only, writing to it triggers a page fault. The fault routine looks up the appropriate map entry and notes that it is a needs-copy copy-on-write mapping. It first clears needs-copy by allocating a shadow object and inserting it between the map entry and the underlying object. Then it copies the data from the middle page of the backing object into a new page that is inserted into the shadow object. The shadow object’s page can then be mapped read-write into the faulting process’ address space.

The third column shows the BSD VM data structures after the process with the copy-on-write mapping forks a child, the parent writes to the middle page, and the child writes to the right-hand page. When the parent forks, the child receives a copy-on-write copy of the parent’s mapping. This is done by write protecting the parent’s mappings and setting needs-copy in both processes. When the parent faults on the middle page, a second shadow object is allocated for it and inserted on top of the first shadow object. When the child faults on the right-hand page the same thing happens, resulting in the allocation of a third shadow object.

To solve problems with shadow objects chaining the anonymous mapping was introduced (SunOS VM system). It based on two abstractions - anon and amap. 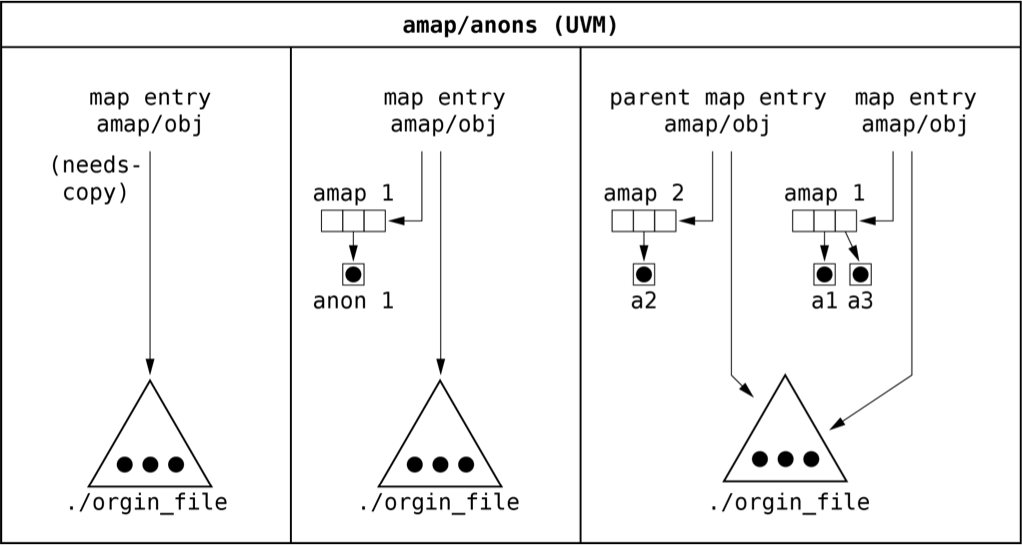 Anon is the structure representing page of anonymous memory. It is created when copy-on-write flags of map entry are set and process writes data to memory. Amap the structure created for particular map entry when needs-copy for the entry is set. Amap stores anons created for the map entry.

When process is forked the memory space of child process is created based on memory space of parent process. All of memory segments (map entries) of parent and child processes are marked as read-only and needs-copy flag is set. Amaps are initially shared between segments (map entries) of child and parent process, but the number of references to each shared amap is set to minimum two. The writable pages belonging to shared entries are mapped in MMU as read only. When one of the processes accesses the segment of memory with needs-copy flag the new amap is created and anons are copied from the original amap. The number of references of each copied anon is incremented and is set to minimum two. The needs-copy flag of map entry is cleared and new anon based on anon from the original amap is created (data is copied from page pointed by original anon to page from the new anon). The number of original anon references is decremented and if number of references is equal to one it can be mapped as writable to the memory space of another process.

The memory sharing technique based on shadowing of particular pages instead of whole objects eliminates the problem of long chains of shadow objects existing in BSD VM.

Phoenix-RTOS derives the memory object architecture from BSD UVM. The structure of its memory management subsystem in the process context is presented on the following figure. 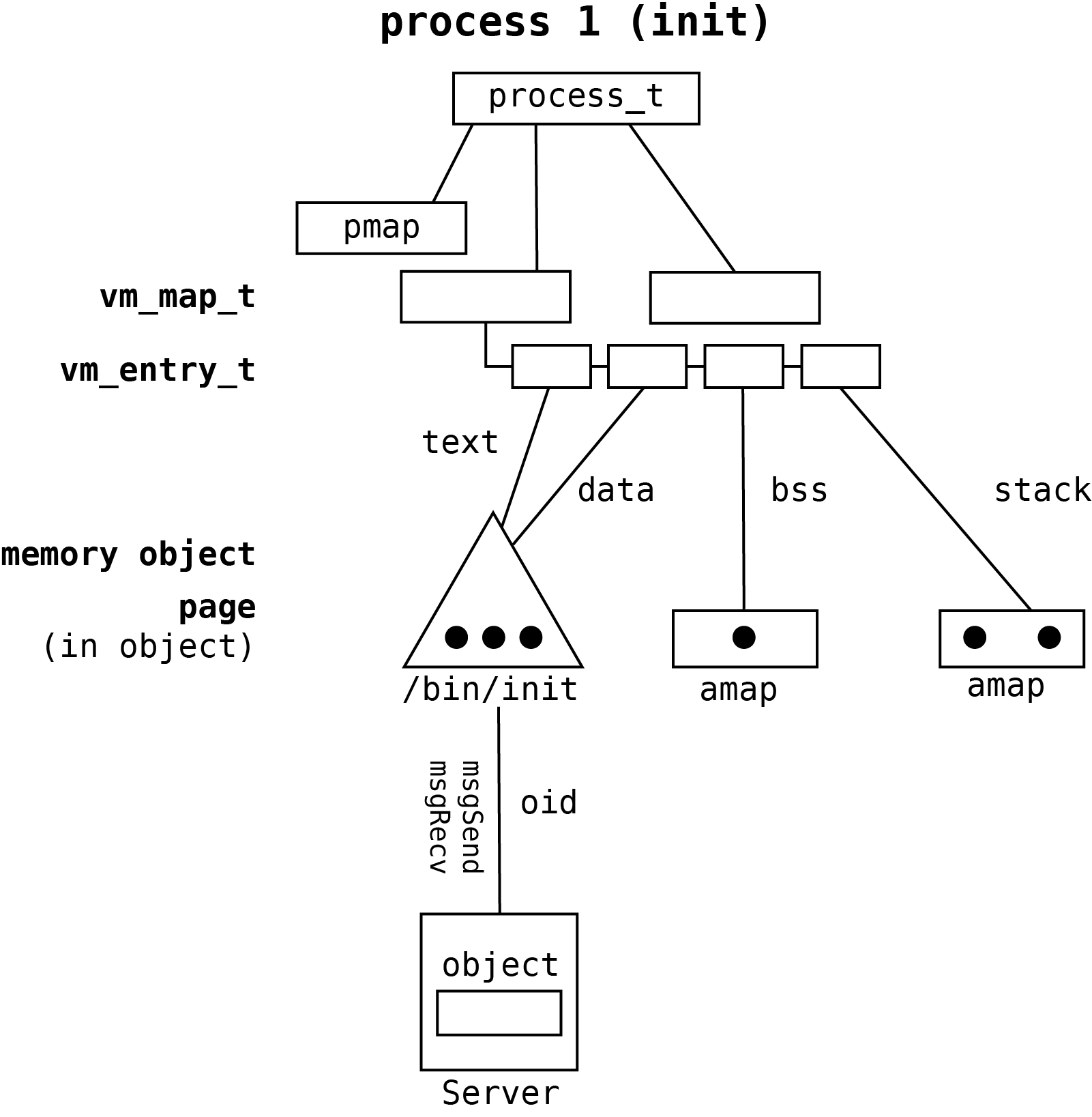 There are three main differences between UVM and Phoenix-RTOS memory objects. Objects are identified by oid_t and handled by external servers and data is fetched and stored using message passing. Processes are not swappable, so there is no swap server for anonymous objects. Memory objects are supported as well on non-MMU architectures, but functionality is simplified.