After memory pages are allocated, they must be mapped into the process or kernel address space so that the memory can be used by the kernel or user processes. A memory mapper is a part of memory management system which is responsible for this process and manages the available address space.

The map definition and its entry is presented below.

The start, stop attributes define the beginning and ending of the address space described by the map. The pmap attribute defines the pmap structure encapsulating the hardware-dependent structures used by the MMU for address resolution. The tree attribute stores the red-black tree of map entries.

Each map_entry_t constitutes a tree node (the linkage field) and the tree is constructed on the basis of the virtual address value (vaddr). The virtual address points to the segment address. It is complemented by the segment size, segment attributes and two special attributes: rmaxgap and lmaxgap, which store the size of the maximum gap between the segments in the left or right subtree of the current node. The segment attributes are defined by the flags field. The object field points to the object mapped into the address space. The NULL value of this field contains the information that mapping is anonymous (no object is mapped). The offset (offs) defines the in-object location of the data which should be copied into the memory.

The figure below briefly presents the idea behind describing the address space with a memory map based on a binary tree. 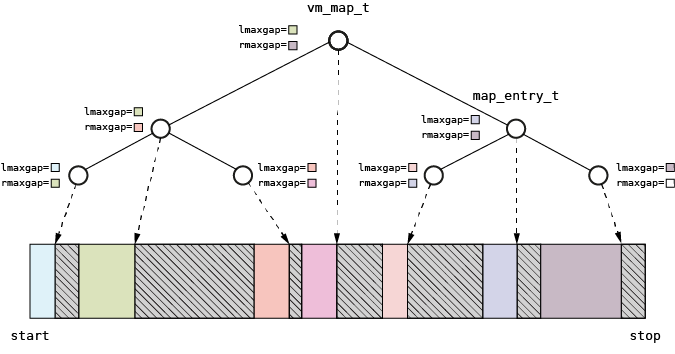 The mapping algorithm is presented below. Due to its complexity, it will be discussed step by step: a fragment of the code is followed by an explanation of each step.

The first entry is assigned to the root entry of the map. The pointers for neighbors are nulled.

The address of the mapping is checked according to the map range.

If the mapping address is not less than the address of the current node, the tree is traversed using the right child.

If we get lost in the tree (the mapping address should be decreased to fulfill the size requirement), the tree is traversed up until the right child with a proper maximum gap is found.

The left neighbor points to the new node.

There is a dependency problem with memory mappings.

It is not possible to map pages directly into the process address space on the user level. Instead, there is mechanism for mapping objects which is based on page mapping. See the next sections for a description of objects and related mechanisms.

The vm_mmap() function maps object into the address space starting from address specified as function argument. Other function arguments define the size of the mapping, the attributes of the finally created memory segment, the object handle and flags determining the function behavior. If fixed mapping is specified in the flags argument mapping tries to map object at specified address. If address range of requested mapping overlaps with existing mapping the function will fail.

A NUMA machine has different memory controllers with different distances to specific CPUs.