libcache is a thread-safe library which implements a n-way set-associative cache. 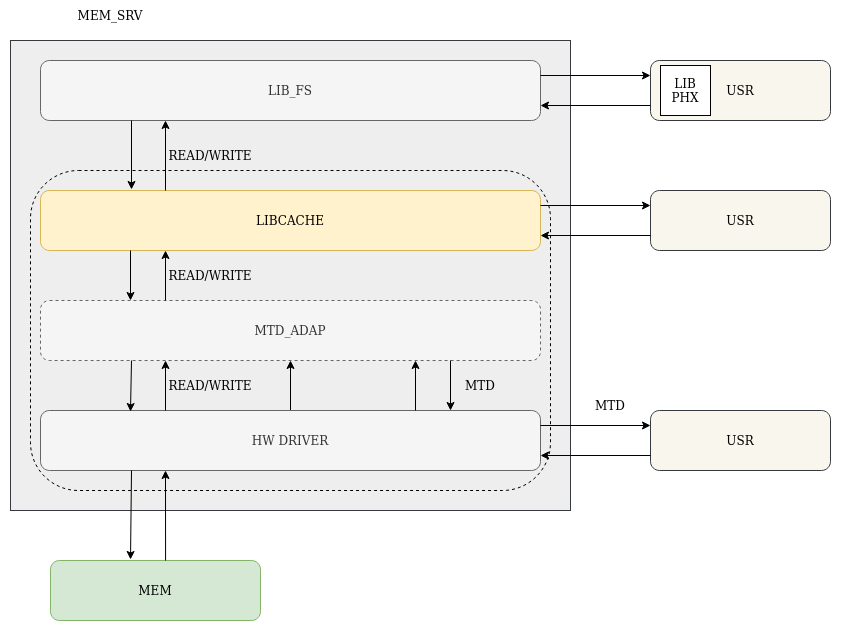 The libcache library is a collection of types and functions which provides the user with tools necessary to create, operate and destroy a cache.

The user is obligated to supply a suitable definition of a device driver context and source memory-specific callbacks that execute write to and read from the cached source memory.

The number of ways in a set (i.e. the number of lines in a set) is defined in a form of a macro directive LIBCACHE_NUM_WAYS. The value is set to 4 by default as it was deemed suitable for typical uses.

Other common associativities are 1 (a fully associative cache), 2, 4 and 8. Larger sets and higher associativity lead to fewer cache conflicts and lower miss rates at the expense of hardware cost.

There are two available write policies: write-through and write-back. The policy is set individually for every write operation by choice of a suitable value of policy argument of the cache_write function: - LIBCACHE_WRITE_BACK - LIBCACHE_WRITE_THROUGH

According to the write through policy the data from the written/updated line is synchronized with the cached source memory upon every write to the cache, therefore they stay coherent at all times.

The write back policy allows the cache and the cached source memory to stay incoherent until the user requests flushing or the old, incoherent data needs to be replaced by new data.

libcache implements the cache as a set-associative cache with n ways and s sets. A cache line contains a tag, a pointer to cached data and flags indicating its validity and whether it is coherent with the cached source memory.

The number of ways in a set (associativity) is simply the maximum number of lines within a set.

The cache is implemented for 64-bit addressing.

The organizaton of the cache is best explained by an example:

The above example is illustrated in the image below.

DISCLAIMER: The numbers of bits corresponding to tag, set index and offset may differ depending on your own example.

Three bitmasks are computed and stored. They are applied to memory addresses in order to extract specific bits corresponding to tag, set index and offset. The tag is used to identify a cache line within a set. The offset indicates the position of a specific byte in that cache line.

The image below represents the logical organization of the implemented cache. 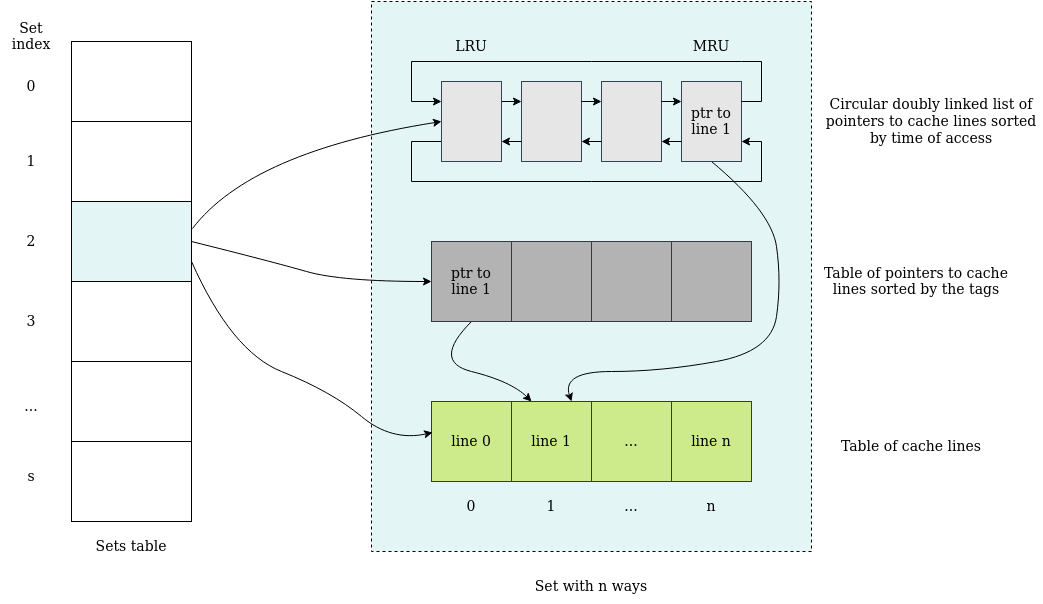 The index in set-associative cache identifies a set of cache lines that may contain the requested data. During a read or write (create/update) operation every line within the set is examined to check whether its tag matches the tag computed from a supplied memory address and that the VALID bit of that line is set. If both these conditions are met, we have a cache hit. Otherwise, on a cache miss, a new block of memory in form of a cache line has to be loaded into the set, replacing the Least Recently Used (LRU) line in that set.

Reading a buffer from a device via the cache

In order to read up to count bytes from a source memory address, a valid buffer has to be supplied. Set index, tag and offset of the first byte to be read from a cache line marked by the tag are computed from the requested memory address.

The user might want to read just a few bytes starting from the offset. However, when count goes beyond the maximum offset of the line, a read from multiple lines is performed. At first, a chunk of data of size equal to

is read into the buffer. Depending on the size of the requested data, a few next whole cache lines might be read into the buffer. The address of the first whole line is computed as follows: The addresses of following lines are computed by adding the size of a whole cache line to the address of a previous line. Each of these addresses is mapped on to a specific cache set. Lookup in a set is performed according to the algorithm below:

The desired chunk of data is read from the obtained line and written to the buffer supplied by the user.

Writing a buffer to a device via the cache

Writing via the cache is implemented similarly to reading: data is written in the cache chunk-by-chunk from a supplied buffer.

The user might want to update just a few bytes in a specific cache line, hence the line needs to be found in the cache first. On success the bytes starting from the offset are updated and a chosen write policy is executed.

If it happens that a line mapped from a specific address does not exist in the cache, it is created and written to the cache according to the algorithm below:

The flush operation is used to synchronize the contents of the cache with the cached source memory so that they stay coherent.

The operation requires a beginning and an end address, as it is performed within a range of addresses.

In order to save the important data on the source memory and invalidate the lines in the cache it is advised to perform cache clean instead.

Phoenix-RTOS libcache library provides a set of functional tests that are available in phoenix-rtos-tests. The tests can be run for different platforms, e.g. ia32-generic-qemu target: